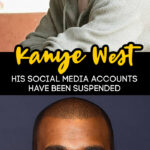 Another day, another shit storm from the Kanye West drama.

This last part was my wording. LOL!! But the meaning is the same.

Not too long ago, Ye (AKA Kanye) claimed that slavery was a choice.

Then he explained that the vaccine is the “mark of the beast”.

He also posted “an abridged version” of a text message thread with Tremaine. I mean – what was all that?!?

NOW – *shakes head* – now he’s spitting out anti-Semitic garbage, and it’s really time someone put an end to his nonsense.

In the same article, he claimed there was no way he could be anti-Semitic “because black people are actually Jewish too”.

He may think quitting the posts is justified, but social media platforms have another take on the situation.

We may impose restrictions on accounts that repeatedly violate our rules, for example, we may temporarily block them from posting, commenting or sending DMs.

So – for now, at least – Kanye and his crazy rambling posts – that we have to fight to connect the dots of madness – are off social media.

At this time, this is a temporary restriction. But, we’ll have to see what social media platforms decide to do with Kanye and his weird outbursts.